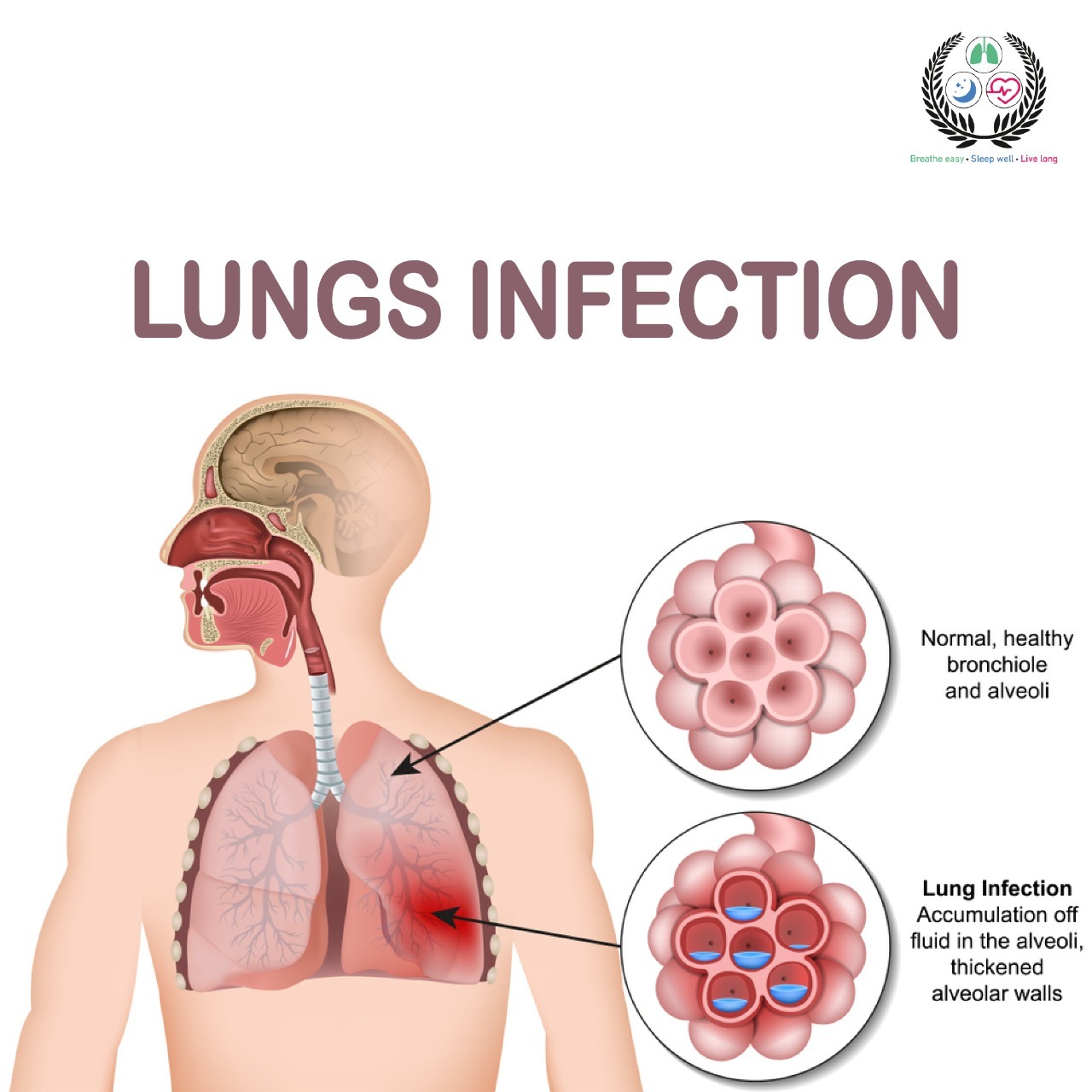 What Is a Lung Infection?

When a virus or bacteria that causes illness damages and inflames the lungs, it is known as a lung infection. This occurs as immune cells surge to the lungs’ airways or lung tissue to battle the infection.

Viral, bacterial, fungal, parasitic, or fungal infections of the lungs are possible. Sometimes, lung infections are brought on by multiple types of microbes. For example, bacterial pneumonia might result from viral bronchitis.

Any kind of lung infection, no matter what the origin, usually results in a specific set of symptoms. The following are a few of the most typical signs of a lung infection:

Cough: Can be light or severe; can be dry (nonproductive—does not produce mucus) or “wet” (productive).

Mucus production: Mucus can be colorless or have an unpleasant odor, and it can also be transparent, yellow, green, brown, or rust-colored.

Wheezing: Wheezing both during exhalation and occasionally during inhalation. When breathing in, a distinct sound called stridor, which is louder than wheezing, could occur. Infections of the airways above the lungs, such as those of the windpipe, can cause stridor (trachea).

Fever: A temperature that is high, very high, or low grade (less than 100 degrees F).

Other possible symptoms of a lung infection include:

Depending on how they impact the lungs and airways, distinct types of lung infections can be identified.

There can be overlap between some organisms that are more likely to cause one sort of lung infection than another. For instance, some viruses can lead to pneumonia and bronchitis.

An infection of the major airways (bronchi) that connect the trachea to the smaller airways is known as bronchitis.

A viral infection is the most frequent cause of bronchitis. Bacterial infections are to contribute 1% to 10% of cases.

The smaller airways (bronchioles) between the larger bronchi and the tiny alveoli, where oxygen and carbon dioxide exchange takes place, become infected and are known as bronchiolitis.

Children under the age of two frequently develop bronchiolitis, which is also the main reason for newborn hospitalizations in the first year of life. Despite this, most kids who contract it don’t need to be hospitalized.

Children with bronchiolitis may experience recurring wheezing or asthma throughout childhood and even into adulthood after they have recovered.

Children experience six to eight colds on average every year throughout the first six years of life. The average healthy adult has three to four colds a year.

A group of typical viruses that can cause lung infections are called non-polio enteroviruses. They can cause severe infections in other sections of the body, such as encephalitis, myocarditis, and meningitis, which all cause inflammation of the protective layer around the brain. They also cause hand, foot, and mouth disease (enterovirus A71) (brain infection or inflammation).

Enterovirus-induced lung infections sometimes begin with cold-like symptoms such as a fever, runny nose, body aches, and occasionally a rash.

Although it can sometimes damage the bronchi, croup mostly affects the structures above the lungs (the larynx and trachea).

Croup is typically brought on by viruses, such as Respiratory Syncytial Virus (RSV) and common cold viruses, but it can also be brought on by a bacterial infection.

A low-grade fever and runny nose are frequent croup symptoms before the distinctive barking cough that worsens at night.

The flu, often known as seasonal influenza, is one of the most typical lung infections. When a person coughs, sneezes, or simply chats, droplets that are released from their bodies are able to spread the influenza A and influenza B viruses. The flu is particularly contagious because of this.

Symptoms of the flu include:

Despite the misconception that whooping cough (pertussis) is a lung infection that can now be avoided with a vaccine, people still contract it.

Although whooping cough can cause mild to severe disease, it primarily affects babies and young children; about 50% of infants with whooping cough under the age of 12 months require hospitalization.

Pneumonia develops in about one-fourth of infants and young children who acquire whooping cough. Encephalitis is a less frequent (0.3%) consequence of whooping cough.

Tuberculosis (TB) is a lung infection that is more common in developing regions of the world. It is caused by a bacteria called Mycobacteria tuberculosis.

The smallest of airways (alveoli), where the exchange of oxygen and carbon dioxide occurs, are affected by pneumonia, a lung infection.

Pneumonia can range from a minor condition that can be treated at home to a serious infection that needs intensive care.

The symptoms of pneumonia include:

Some of the most common risk factors for lung infections include:

The course of treatment for a lung infection relies on the underlying cause, the severity of the patient’s illness, and any other medical conditions.

For instance, those who have narrowing of the airways as a result of a lung infection (reactive airway disease) may require corticosteroids to treat inflammation as well as inhalers that open the airways.

People who experience low oxygen levels (hypoxia) as a result of a lung infection may require oxygen therapy, and in extreme circumstances, breathing assistance such as assisted breathing or mechanical ventilation may be required.

Here are a few instances of various viral lung infections that could be treated:

If Tamiflu (oseltamivir), a medication for influenza A, is started as soon as possible, it may lessen the severity and duration of the infection.

A monoclonal antibody therapy may be used to treat children with bronchiolitis caused by RSV who are at very high risk.

Different COVID-19 treatments are being tried but we’re still learning about which ones help and which ones do not. If your provider thinks you are at risk for complications, they might want you to take antiviral medications.

The mainstay of treatment for bacterial lung infections is antibiotics. Which bacterium is responsible for the infection will determine which antibiotic is taken.

In some circumstances, a healthcare professional may decide to begin antibiotics while they wait for test results. They may switch the antibiotic once they have identified the bacterium that is causing the infection.

Depending on how ill a person is, they may be able to consume the medication orally (oral antibiotics) or may require an IV to administer it to them.

Furthermore, time is crucial. Antibiotics, for instance, must be started as soon as possible in the case of pneumonia.

Anti-parasitic drugs are used to treat parasitic lung infections. Depending on the parasite that is infecting you, you’ll need to take a particular treatment.

By itself, a lung infection can be a dangerous condition, but it can also trigger other health issues, some of which can also be life-threatening. Acute lung infection problems might occur right once after becoming ill or they can develop over time (chronic).

Breathing issues are among the worst effects of lung infections. Patients with asthma, for instance, may experience an asthma attack in response to viral lung infections.

Chronic obstructive pulmonary disease (COPD) sufferers who have lung infections may experience exacerbations, which may aggravate their illness.

When a person recovers from a lung infection, some side symptoms linger. For instance, infants and children who have bronchiolitis are more likely to develop wheezing and asthma later in childhood.

The possibility that viral lung infections could increase a person’s risk of developing COPD is also a cause for concern.

When to Seek Medical Care for a Lung Infection

If you have a lung infection, certain signs and symptoms mean you need medical care by lungs specialist doctor
: