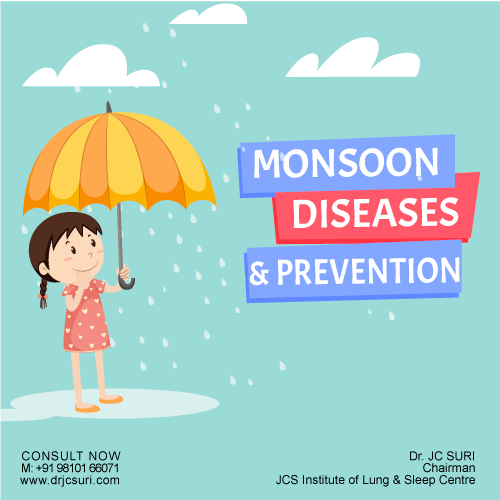 Be cautious this monsoon

The monsoon has begun. We frequently forget some of the dangers involved with this great season, dangers that can create a wide range of health issues for us and our loved ones, as we celebrate by splashing and leaping into puddles.
The danger of illness is greater during the monsoon than during any other time of year because the high air moisture content is favorable for the growth of bacteria and viruses. Let’s examine the dangers we face throughout this season and how we can be safe.

Monsoon diseases have 3 mediums of transmission:

Rainwater is the purest form of water but due to pollutants, it picks up from the atmosphere, and the unhygienic methods used to store and distribute it makes it unsuitable. Therefore, exposure to such water places us at the risk of contracting diseases like:
⦁ Typhoid
⦁ Jaundice
⦁ Hepatitis A
⦁ Cholera

The monsoon season brings heavy rains that can cause stagnant water to build up and serve as the ideal mosquito breeding environment. In consequence, this promotes the spread of illnesses like:
⦁ Dengue
⦁ Malaria
⦁ Chikungunya 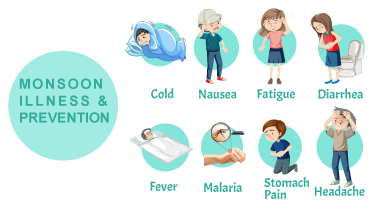 The common cold is one of the most commonly occurring health sicknesses during the monsoon season in India. It is a highly contagious disease due to the spread of the virus in the air which infects the upper respiratory tract and thus affects the nose and the throat.

Runny or stuffy nose, body ache, throat irritation, soreness, and fever. It is always advisable to consult a physician and get the required
The best way to prevent the common cold is to have a healthy, balanced, and nutritious diet regular which will develop the immune system of the body and improves the body’s resistance.

“Cholera” is another caused by bacteria that are most prevalent and devastating during the monsoon. This illness is brought on by tainted food, water, and unsanitary living circumstances. Severe diarrhea with watery stools, or “rice-water stools,” and vomiting, which results in an instant loss of fluids and muscle cramping, are common cholera symptoms. Diarrhea that is this bad can quickly cause electrolyte imbalance and serious dehydration.

Another waterborne bacterial infection called “typhoid” is brought on by the Salmonella bacteria. Typhoid causes gut ulcers, which induce fever. This illness is brought on by eating or drinking food or water that has been tainted with an infected person’s feces. The Widal test and any stool, bone marrow, or blood cultures are used to diagnose patients.
Yes, it would be sensible to avoid the most terrifying rainy season infections by avoiding horrifyingly unclean roadside cafes.
Long-lasting high fever, excruciating abdominal pain, and headaches are all signs of the illness. Vomiting is also a frequent symptom. The worst aspect is that, even after a patient is cured, the disease’s infection may still be present in the gall bladder.
Preventive measures include providing clean drinking water, better sanitation, and better hand washing.
Highly infectious & communicable disease that spreads through contaminated food and water during the monsoon season. Poor hygiene and sanitation is the main cause of Typhoid Fever. Common symptoms are fever, headache, sore throat & abdominal pain.

The hepatitis A virus, which causes hepatitis A, is a highly contagious liver ailment. It is a waterborne viral infection that is typically brought on by eating or drinking food that has been infected by the virus, which can also be transferred by flies. Consuming produce or other foods that have been contaminated during handling can transmit an infection. The virus-induced liver inflammation that is a direct result of this disease is a symptom.
Symptoms include jaundice (yellow eyes and skin, dark urine), stomach pain, loss of appetite, Nausea, Fever, Diarrhoea, and Fatigue.
Blood tests are used to detect the presence of hepatitis A in your body.
Practicing good hygiene, including washing hands frequently, is one of the best ways to protect against hepatitis A

Dengue fever is a disease caused by a family of viruses that are transmitted by mosquitoes. It is spread by what’s known as the tiger mosquito (Aedes Aegypti), which has black and white stripes and typically bites early in the morning or at dawn. Dengue goes by other names, including “break-bone fever.
Symptoms of dengue fever include severe joint and muscle pain, swollen lymph nodes, headache, fever, exhaustion, and rash.
A complication of dengue fever is called Dengue hemorrhagic fever (DHF). It is a specific syndrome that tends to affect children under 10 years of age. This complication of dengue causes abdominal pain, hemorrhage (bleeding), and circulatory collapse (shock).
There are no specific antibiotics or antiviral medications to treat it. For typical dengue, the treatment is concerned with the relief of the symptoms and signs.
It is a mosquito-borne disease; symptoms include high-grade fever, rash & headache. The control measure of Dengue Fever requires the elimination of mosquito breeding places. The tests which can be done are CBC, Dengue NS1 Antigen, and Dengue IgM.

-As it’s transmitted via mosquitoes, one should wear a strong insect repellent containing DEET to prevent getting bitten.
-People should also wear full sleeve clothing when out during the day.
– It is important to remember that the dengue mosquito usually bites only in the daytime and breeds in clean, fresh water. So any water accumulation should be avoided.

Malaria is one of the most prevalent illnesses linked to the monsoon and is brought on by certain mosquito species that breed in contaminated water. During the rainy season, there is an issue with waterlogging, which creates ideal conditions for mosquito breeding. The female Anopheles mosquito is the carrier of this disease. Most deaths are caused by P. falciparum, the most dangerous type of malaria known as cerebral malaria. Other forms of malaria are P. vivax, P. ovale, and P. malaria
Malaria is typically diagnosed by the microscopic examination of blood using blood films, or with antigen-based rapid diagnostic tests.
It is characterized by fever, body ache, chills, and sweating. If untreated, it can lead to complications like jaundice, severe anemia, or even liver and kidney failure. Malaria is treated with antimalarial medications successfully.
Maximum cases of Malarial Fever are seen in monsoons. Mosquitoes are responsible for transmission. Rain provides opportunities for the breeding of mosquitoes in water-logged areas. Symptoms range from mild to severe, like fever with chills, headache, jaundice, severe exhaustion, and fluctuating state of consciousness. The tests which can be done are Malarial Parasite (MP) Smear and Malarial Parasite (MP) Antigen.

Preventive measures –
⦁ Take an antimalarial drug as a precautionary measure in mosquito-prone areas.
⦁ Also, take measures to prevent mosquito bites such as wearing full sleeve clothing.
⦁ Application of anti-repellent mosquito creams and Electronic mosquito repellent devices can be used during the monsoon season to avoid mosquitoes at home.
⦁ Accumulation of dirty water must be kept in check to prevent malaria mosquito breeding.
⦁ Insecticide-treated mosquito nets (ITNs) and indoor residual spraying (IRS) are highly effective in preventing malaria in your neighborhood and can reduce the breeding of mosquitos also.

Viral refers to any fever brought on by a virus. A viral fever frequently brought on by a sudden change in weather is marked by exhaustion, chills, body pains, and fever. Contagious droplets in the air or direct touch with contaminated secretions are the two main ways the sickness spreads. A viral fever typically lasts 3 to 7 days, with the first three days being the most severe throughout that time.
In general, antihistamines, decongestants, and antipyretic medications are advised for the treatment of side effects and symptoms using over-the-counter medications in conjunction with a doctor. In most cases, viral illnesses are self-limiting and don’t require antibiotics unless secondary infection occurs.

⦁ One must ensure that they do not get wet in the rain or stay in wet clothes for a long period
⦁ Wash their hands often,
⦁ Boost their immunity by eating Vitamin C-rich foods and green leafy vegetables. They must also keep a distance from an infected person.

During the monsoon season, gastroenteritis and food poisoning are quite prevalent, and excessive humidity encourages the growth of pathogenic germs. In general, gastroenteritis symptoms include nausea, vomiting, diarrhea, and stomach cramps. As the sickness progresses, a fever may appear, and one may experience malaise and weakness.
A bland diet of rice, curds, and fruits like bananas and apples is advised in addition to maintaining constant hydration. Coconut water or rice kanji water are also effective hydration remedies. ORS is typically advised.

Preventive measures:
⦁ Try and avoid eating raw food like salads because it is difficult to ascertain whether they have been washed, cleaned, and stored at the right temperature
⦁ Avoid roadside food which may be made in contaminated water and trigger diarrhea.

Prevention is better than cure:

Some measures to ensure that monsoons become an enjoyable experience without hampering health.
⦁ One must drink only clean water and use boiled water or water purifiers.
⦁ One should change their hand towels after a day’s use.
⦁ One should cover their mouth and nose with a handkerchief while coughing or sneezing.
⦁ Use mosquito repellents and nets (dengue-transmitting mosquitoes usually bite during the daytime; either early morning or late evening).
⦁ One should keep their wet and soggy clothes or shoes away from dry garments.
⦁ Avoid eating out and consume as much fresh food as possible.
⦁ Drink warm water every two hours and carry home-boiled water while traveling.
⦁ Avoid visiting crowded places such as theatres or exhibitions.
⦁ Use hand sanitizers while traveling.
⦁ Cover your nose while traveling on a bike/while seated next to the window in a bus or train.
⦁ Avoid getting wet in the rain.
⦁ To keep in mind: Avoid self-medication

So, here are some things you can do to stay safe in the monsoon:

Because of the unsanitary environment and lack of adherence to fundamental preventive measures, there is a very significant risk of contracting numerous diseases throughout the monsoon season. Many of these monsoon illnesses go undetected until they develop unfavorable side effects. Because of this, early disease detection and treatment during the rainy season might mean the difference between life and death. You should be aware of the following frequent illnesses that are very common during this time of year. It is also advisable to be aware of the steps that you and your family can take to prevent these infections.

⦁ Keep yourself hydrated at all times – ensure you drink only boiled water, and avoid drinking anything outside
⦁ Follow a strict personal hygiene routine at all times to avoid fungal infections
⦁ Wear full-sleeved and light clothes to protect your skin.
⦁ Eat a balanced diet and keep your immune system strong.
⦁ Consume freshly-washed, boiled vegetables, reduce your intake of fats, oils, and sodium, and avoid dairy products as they can contain microorganisms that are harmful to your health.